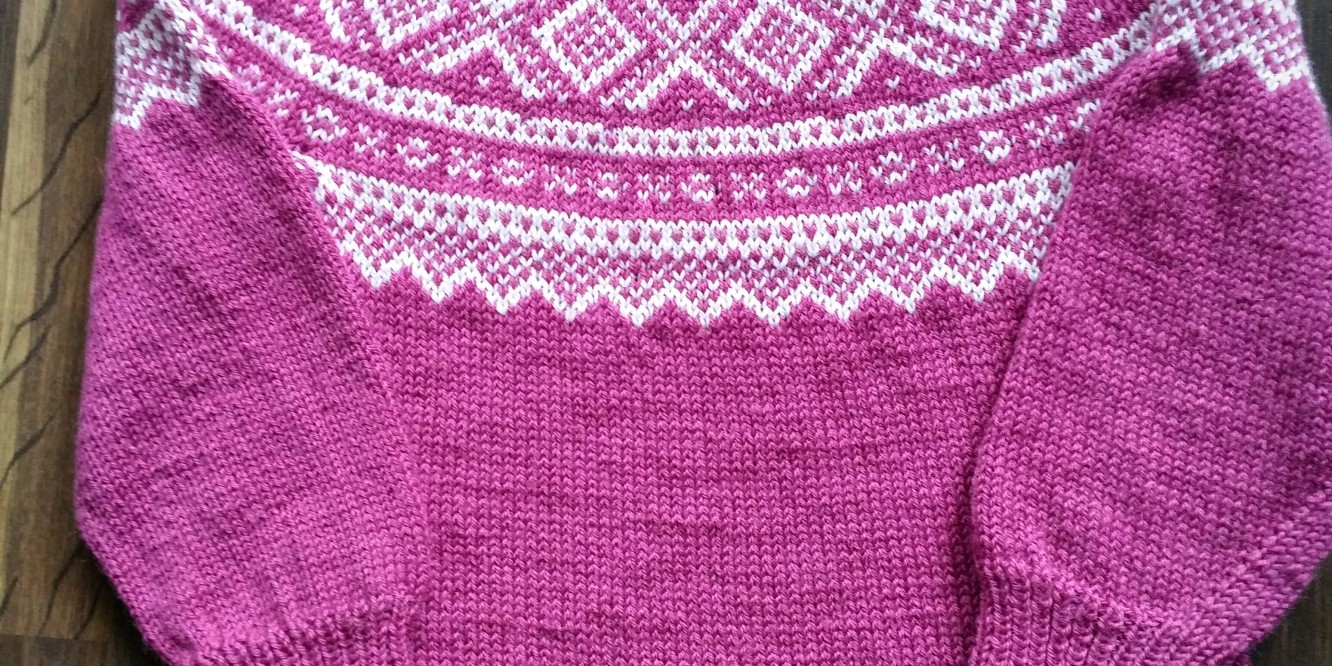 Given the success I had with the Little Boy Brown sweater, I decided to knit a larger version for my niece, Aubrey.

I loved working on it so much that it all went very quickly – I was even working on it on the plane to and from Malta in May. It was just such a pleasure to work with and there were almost no complications.  I have a good system for handling two different colors (both hands) and therefore steady tension. At this point, the pattern being in Norwegian is no longer an issue. I understand the different concepts and can go right along.

Knitting on a plane (picture or it didn’t happen, right?):

Here’s the final version, pre- and post- blocking.* All I did was soak it in water with some Euclean  and then lay it flat, evening it out. I had actually  put off blocking it for at least a week, thinking that I wouldn’t have time to let it sit in the water then pull it out after not too long. Satisfied that I was going to be home for a while, I put it in the sink at 8:00 … and then promptly forgot about it until about 18:00. When I remembered it, the sweater had sucked up all 10+ liters of water that had been in the sink.  It took two days to dry!

Unfortunately, I heard that Aubrey does not actually like pullovers – though the colors were spot on! As I’m not going to try and force a three year old to wear something she doesn’t want to, I’ve put it in a drawer for someone else who might like it.  It recently occurred to me that I could probably steek it and turn it into a cardigan. However, as I’ve understood, you usually keep a section free in the front for steeking; it might not be a good idea when unplanned. I don’t quite dare – so it’ll hang out in a drawer for a bit longer.

If you’re curious about the operational knitting notes or the pattern, please see the Ravelry project page.

*  Eek! I just realized that there is a sweater sitting in the sink full of water now and has been for at least two hours. I took a break from writing this blog post to go and rescue it. 🙂

Based in Stockholm, Sweden, Hannah has wholeheartedly embraced the Nordic knitting tradition. Even as her yarn stash threatened to take over their small apartment, Hannah decided to start sewing. Her partner is very tolerant of her fiber-related addictions but does not like pins or needles. Previously a Microsoft SharePoint consultant, Hannah now works as a WooCommerce Happiness Engineer on the payments team at Automattic. View all posts by Hannah Swain Løvik