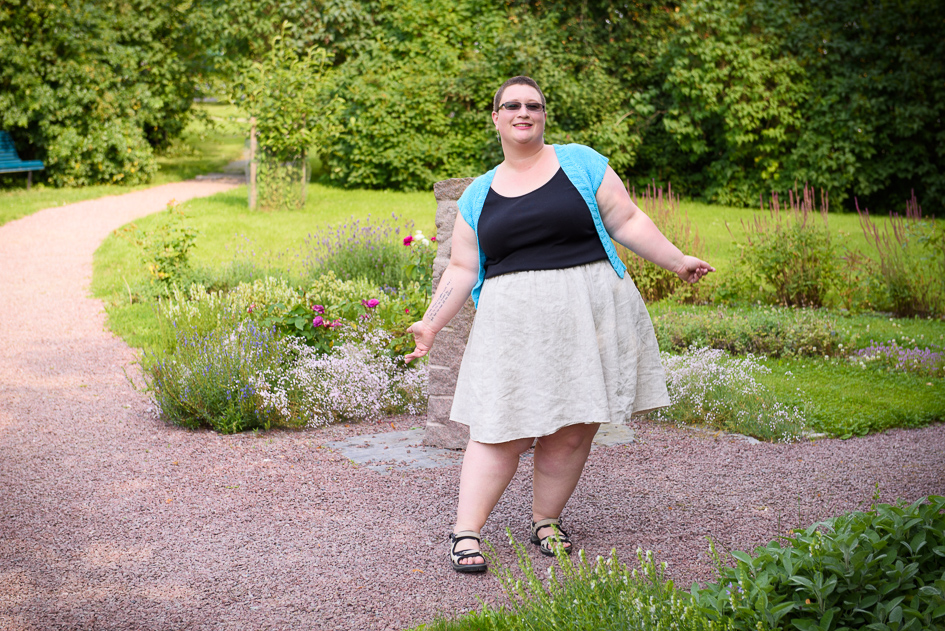 I loved both of these patterns so much that I had to make more!

One of my favorite skirts and one of my very first successful makes was my Sewaholic Rae linen skirt.  I wore that skirt all over the world. The biggest issue and the reason I couldn’t wear it to the office is that it’s too short – I hadn’t learned the principle of measuring your hem from the floor yet, which meant it was fine in the front and way too short in the back. On my most recent skirt, I had a hem difference of 12 cm on the front versus the back.   I recently mastered this skill, resulting in the flowery viscose Rae and a black drill Pavlova circle skirt which are both long enough in the back. I was telling Fred how much I loved that first Rae in linen, though and he said something really obvious: why don’t you just make another one?

Huh. I had initially avoided this idea because, well, I have issues paying 120 sek (nearly $14 USD with today’s exchange rates) per meter of fabric. That’s so expensive! Well… for something that I absolutely love, maybe it’s not. And YNAB (You Need a Budget) tells me that I can find space in my clothes budget for a piece of cake. So, why not? I went back to Ohlssons Tyg in Stockholm and bought another 1.75 meters of this fabric. My second Rae (view C) in linen was born!

I used the same pattern pieces as on the flowery viscose Rae and could probably have taken it in a bit at the waist. However, after three or four runs through the washing machine, the fabric has softened beautifully and drapes so nicely that you can’t really tell.

This skirt has pretty much been my uniform ever since I tossed the rolled hem on it a few weeks ago. I’ve worn it everywhere – on vacation, on a road trip and even to work.  It’s solid, it holds up and it’s so comfy with the elastic waist. It wrinkles like crazy, as linen does. The rolled hem is looking a tad rough, but it does match the rougher texture of the linen so it’s all good. But it’s such a beautiful, simple skirt.

I ended up  loving my black cotton-merino Hyss cardigan far more than I ever expected to. I loved it so much that I cast on a new one almost immediately! I also wanted an easy project to practice the new-to-me method of Continental purling. After this project,  I can safely say that I have this new method down pat.

The project used 440 meters of Svarte Fåret Cecelia yarn, which is a cotton, linen and rayon mix.I’d bought the yarn a few years back at Gjestdal Garn in Norway when I still thought that a piece like the C2Knits Sadie shell looked good on me. I realized before casting on that it really didn’t and the yarn just went into my stash. Having a stash came in handy! :)I’m still not sure if this color is ice-blue or a light turquoise – my opinion changes depending on the light.

I had also wanted to try making a Hyss that was a bit longer. On the first Hyss, I had knit the back ribbing to 15.5 cm instead of the 17 cm as written in the pattern as I am short-waisted. Once the shrug was done, I had thought it was a bit short but after wearing it for a while I ended up really liking it!  On this second shrug, I took the middle-back ribbing to 20 cm from the armhole, then added 5 cm of ribbing at the bottom as per in the pattern. You can see that it’s a tad too long, though I do like it! I think the pattern’s 17 cm would have actually been spot on. 🙂

I like the lighter color here – it’s a little harder to match to other clothing than black is, but you can see the detail in the shoulders better. On the other hand, the yarn content and the color show any kind of tension issues much better. I think it can just be put down to a characteristic of the yarn and be taken as a feature and not a bug. 🙂

Many thanks to Fred for his photography and photo editing!

Based in Stockholm, Sweden, Hannah has wholeheartedly embraced the Nordic knitting tradition. Even as her yarn stash threatened to take over their small apartment, Hannah decided to start sewing. Her partner is very tolerant of her fiber-related addictions but does not like pins or needles. Previously a Microsoft SharePoint consultant, Hannah now works as a WooCommerce Happiness Engineer on the payments team at Automattic. View all posts by Hannah Swain Løvik