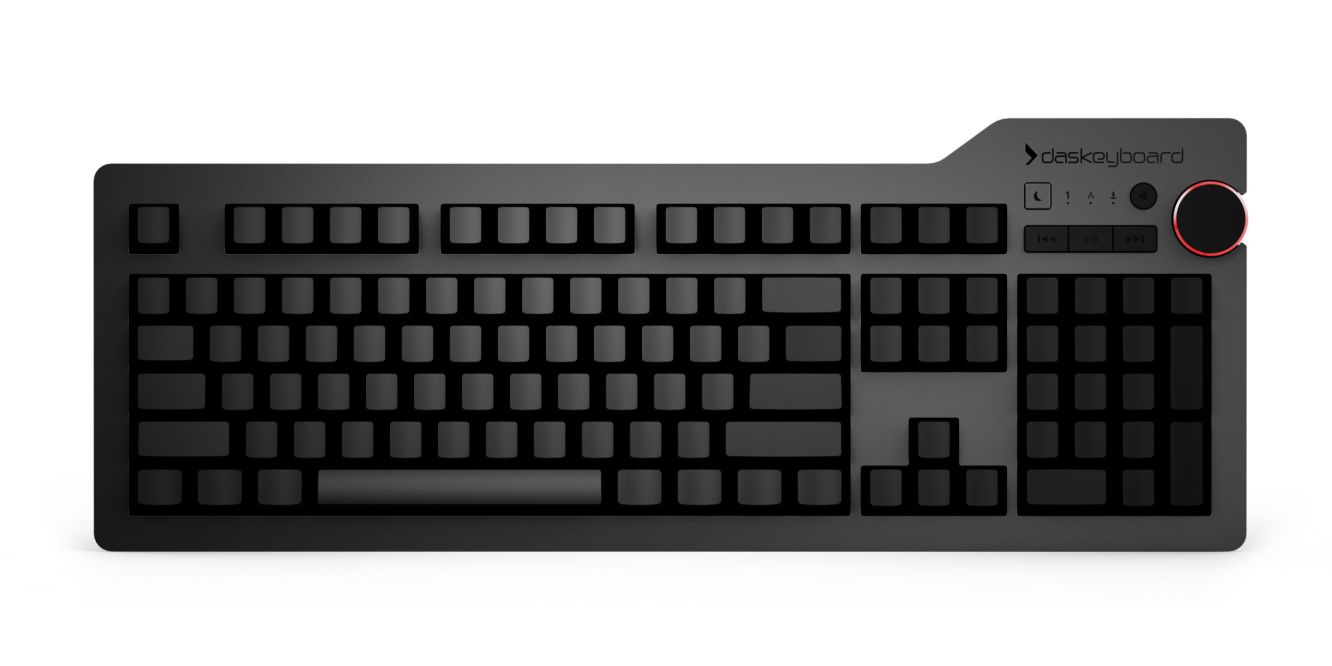 Ever since I saw this keyboard on Lifehacker many years ago, I wanted it. There was something about having blank keys that appealed to me as a typist – after all, if I didn’t need to look at the keys, then why bother having any labels?

Last fall, Fred and I looked at each other and decided to each buy the DAS Keyboard Ultimate. I had no idea that we were taking the red pill by buying a mechanical keyboard.

We both knew that we wanted the DAS keyboard Ultimate. What I didn’t realize was that it was a special type of keyboard – at that point, I knew there were ergonomic keyboards and Apple keyboards, but I didn’t quite realize what a mechanical keyboard was. To make a long story short, it has mechanical switches and you can choose the type of switch.  The type of switch determines how it feels to press the key … and the the amount of noise it makes. The “click” is the mechanical switch being pressed, while the “clack” is the sound of the key hitting the base of the keyboard.  Lifehacker has a really good breakdown of the different switches on their article How to Choose the Best Mechanical Keyboard (and Why You’d Want To)

DAS Keyboards offer the choice between Cherry MX Blue and Cherry MX Brown switches. It turns out that blue switches are known as “clicky” because they are crisper and louder than the brown switches, which are known as “soft touch”. Just knowing that isn’t the same as hearing the difference for ourselves. We thought about buying a sample kit, but ended up both listening to this video to decide between the brown and blue switches:

We both ended up choosing the blue switches. I really like a crisp key, so that was decided. Fred chose the blues because he “wanted a good old keyboard like the Compaq ones.”

We did have a discussion about choosing a blank keyboard or one with legends.  From all reviews that we read, people didn’t regret taking the blank keyboard. It could be a bit tricky with passwords, but eventually you get used to it. We went with the blank keys for the sheer geeky factor.

Then there was the decision about keyboard layout. For Fred, it was easy – he chose a standard ISO 105-key keyboard and used the standard Norwegian Bokmål keyboard mappings. It didn’t matter where we bought the keyboard from as it was blank. 🙂 You can see it’s an ISO keyboard because of the large “enter” key.

For me, things were a little more difficult. I typed for many years in the Netherlands, where US-International is the common layout. When I moved to Sweden, I just used a Swedish keyboard (which looks extremely similar to the Norwegian one pictured above) and changed the keyboard layout to US-International. I tried to switch a few times, but kept getting messed up any time I need to write code: many symbols are in different places. I ultimately went with an ISO keyboard as well, with the thought that I had access to the Swedish keys if I ever needed them.

Here’s an unboxing for your viewing pleasure:

We’ve been using the keyboards for close to six months now and really like them.  The DAS Keyboards are solid and well made. The blue switches feel very crisp and you do get used to not having labels on the keys. For Fred, the blue switches really aren’t that noisy, but for me … well. I bottom out when I hit the keys, so it does get noisy. But then – I mentioned having taken the red pill. There are customisation options!

One Reply to “Introducing my keyboard, the DAS Keyboard Ultimate”