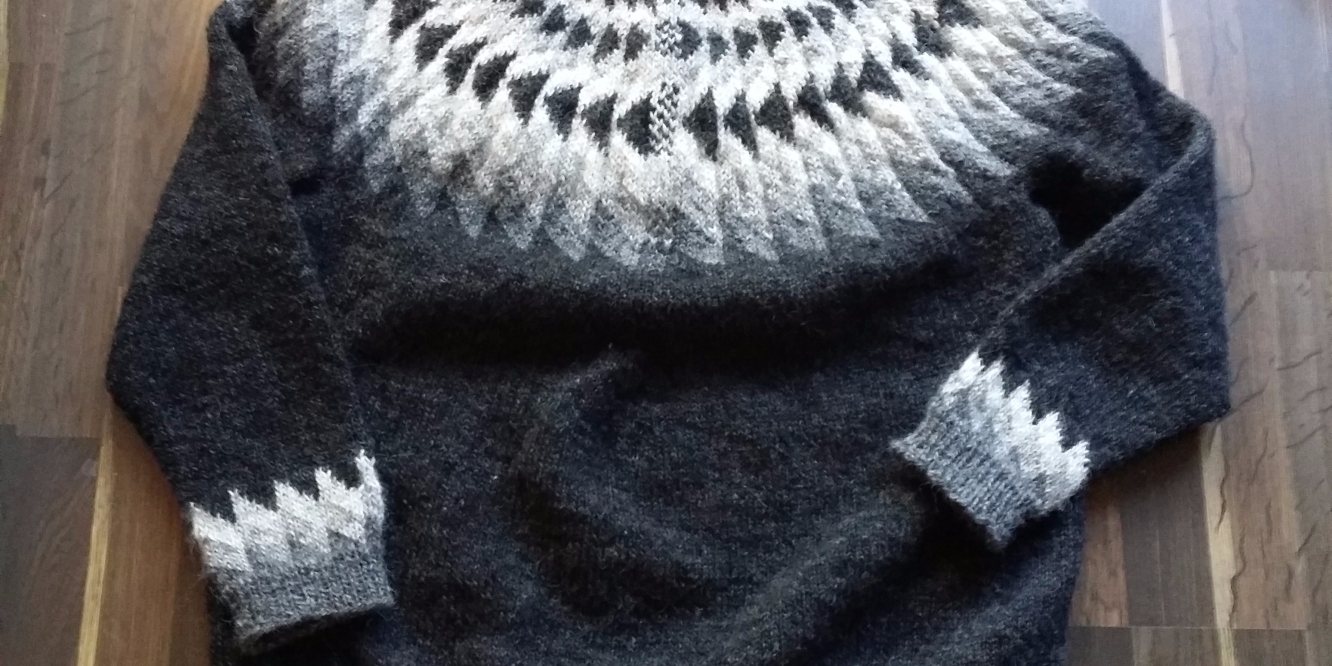 This sweater came into being the Sunday morning that I asked Fred, “If you would hypothetically like a sweater, what would you prefer?” I was at a stage where I enjoyed planning out projects, choosing the yarn, etc. Fred liked the sweater I had chosen and away I went!

According to the Ravelry project page, this took me just over a month in 2015 from doing the math, casting on, steeking and putting in the zipper and then modifying the neck. It was quite a fast knit, given that Lett Lopi goes quickly and the colorwork looks far more complex than it actually is. It took nearly two years to get photos and finish writing about it.

The pattern was available for free and online on the Järbo site – as long as I was willing to have it in Swedish.  Note: click on the Swedish flag to view the PDF. You can also get it in English, but then you need to order a book from Ístex. See the pattern page on Ravelry for more information.

Thankfully, after having learned to read the Marius sweater patterns with my MiL which are in Norwegian, Swedish really wasn’t an issue. It’s also a fairly simple pattern if you’re familiar with how a bottom-up yoked sweater goes together. It does amuse me that by being able to read English, Swedish and Norwegian, I can read approximately 70% of the world’s sweater patterns. 🙂

I made a number of modifications to make this a sweater that Fred would want to wear. I also had to grade up from the largest size to make it work – there was a lot of math involved, but thankfully bottom-up raglans are straight-forward.

I tried to find the best way to do a full tummy adjustment for a sweater. I finally cast on the final number of stitches to cover the stomach, then did paired decreases on each side of the steek section to provide room. It does work, and the shoulders fit correctly, but I’m still not sure if this was the right way to do it.

The pattern called for starting each row at the side. Because I wanted to steek the sweater, I added five “steek” stitches at the center-front and made that the starting point.

Here’s the blocked sweater, pre-steek. you can really see the steek stitches in the yoke – I alternated the colors to create a checkerboard pattern for stability.

I sewed down the four outside stitches and then cut straight up the middle. I found that pulling a piece of contrasting yarn through made it much easier for me to keep track of where I was sewing – there were just so many stitches. 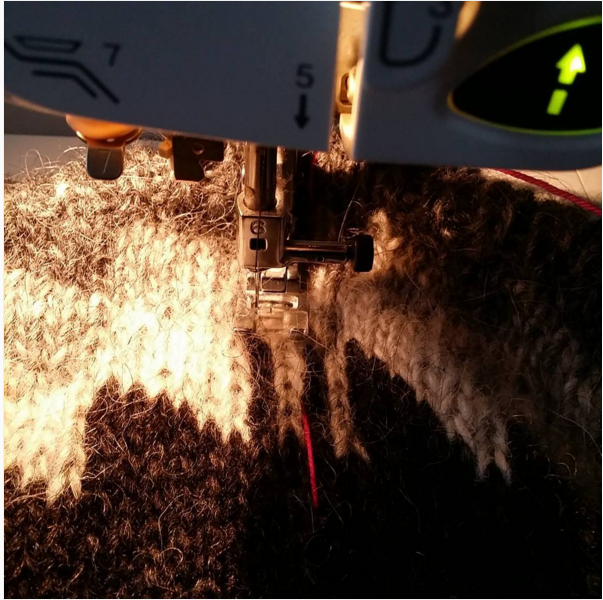 It was scary, as it was my first steek, but it went brilliantly! I made sure the selvedge from the steek was covered by the zipper.

Thanks to my adventures with the Pavlova skirt, I knew how to insert a zipper and knew the basics of what I was looking for.

I spent a fair amount of time considering which type of zipper to buy.  This article on What is the difference between zippers was very helpful in making an informed choice.  I had originally been thinking I’d like plastic as I liked the look, but apparently it’s very difficult (if not impossible) to repair if a tooth breaks. As putting in this zipper is going to be very tricky, I’d rather not have to replace it in a few years. I finally chose a 36″ separable metal zipper from Minerva Crafts, mostly for the look and the vintage feel.

I found the zipper pretty fiddly to put in. I did each side separately, which really made it harder. Next time, I’ll keep the zipper zipped and then insert it.

I ended up going back and picking up extra rows for the neck, as it just didn’t come up high enough. I then blocked it a second time, which really helped it to relax.

Winter has been cold this year in Sweden and Fred has thanked me numerous times for this sweater! He says he has also gotten compliments on it, which is nice to hear.

The yarn has softened up quite a bit. Lett-lopi really isn’t meant to be worn on bare skin, but the cardigan is fine on lower arms if you’re wearing a t-shirt or similar. Every time I pick it up, I expect it to be heavier – for this much yarn, it doesn’t weigh very much.

I still haven’t gotten a photo of Fred in it and waited so long that I finally took photos in the summer of 2017!

Jon lopi in Lettlopi – I knit this summer 2025 but never got around to taking photos. Definitely inspired by all of the gorgeous examples in Iceland